Vampire Diaries #3.17 “Break On Through” Spoilers

The CW has released an official description for the March 22 episode of The Vampire Diaries. 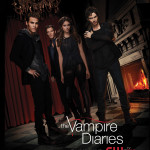 The CW has released an official description for the March 22 episode of The Vampire Diaries. Enjoy the new spoilers – and hey look – Cassidy Freeman’s in this one too!

FAMILY HISTORIES — A century after their first encounter, Damon (Ian Somerhalder) and Sage (guest star Cassidy Freeman) meet again at the ceremony to kick-off the restoration of Wickery Bridge.  Damon is surprised to learn the reason Sage has returned, and pleased when she devises an unusual method to help him figure out what Rebekah (guest star Claire Holt) is up to.  Abby (guest star Persia White) is having a hard time adjusting to her new reality, despite Bonnie (Kat Graham) and Caroline’s (Candice Accola) efforts to help.  When Damon informs Elena (Nina Dobrev) of Stefan’s (Paul Wesley) latest struggles, she reaches out to Stefan to help her save a friend in danger, in hopes that it will help bring Stefan even closer to his humanity.  Finally, when Damon discovers a new secret weapon, he lets Stefan in on the news. Lance Anderson directed the episode written by Rebecca Sonnenshine (#317).