Review: DC Universe’s Titans Doesn’t Quite Get It Together

Review of the Titans pilot from DC Universe

I have long thought that DC Comics’ Teen Titans franchise would be perfect for television. In most incarnations they are led by Robin-turned-Nightwing Dick Grayson who in many ways became a better hero than his Bat-mentor. The story is prime for being about how young people often rebel against their parents, which each character from the legendary Marv Wolfman-George Perez New Teen Titans comic book run having issues with the adults in their lives. But best of all, thanks to the Teen Titans and Teen Titans Go! cartoons, a whole generation knows the characters’ adventures. When there’s trouble, they know who to call.

This summer’s Teen Titans Go! To The Movies was one of the most enjoyable comic book features of the year, which is saying something since over on the Marvel side we had the exciting Black Panther and Avengers: Infinity War. I may not be the target demographic for Teen Titans Go! — the cartoon series can often be way too childish for me — but I appreciated that it was not only appropriate for all audiences, but it also skewered the heck out of many comic book movie tropes. It was a much smarter movie than it had any right to be…. and I kind of wish the writers of Titans, which premieres October 12 on the DC Universe subscription service, had taken some cues from the film and the cartoons for hints on how to handle some of these characters. 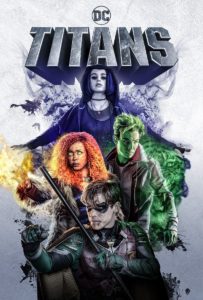 I should probably start with what Titans gets right: Brenton Thwaites is a fantastic choice for Dick Grayson, and his costume as Robin is one of the most thought-out and well-done parts of the show. While the show takes the violence level a bit too far (more on that in a moment), the happiest I may have been watching Titans is seeing a Robin who looks right — something that really has never been done seriously before. (Sorry, Chris O’Donnell and your Bat-nipples). Thwaites also has the acting chops to play a character like Dick…. but considering Grayson is one of my favorite characters in the entire DC pantheon, it also hits me that this show misses one of the most important parts of the character: Dick Grayson is the well-adjusted version of Batman. Yes, his parents are killed, but Robin still was often the optimistic joy to counterbalance Batman’s brooding. This Robin is hyper-violent, probably wouldn’t care if he kills someone… and the “F— Batman” of it all is gratuitous and unnecessary.

“F— Batman” aside, that’s a thing people will get when watching this: It’s extremely violent, to the extent that it even makes something like Marvel’s Daredevil look tame. Robin is almost sadistic in how he handles bad guys. And this isn’t Jason Todd — he’s coming later. The whole thing makes me a little sad, because those kids who grew up watching Titans cartoons won’t be allowed to watch it…. and if parents buy a subscription to DC Universe and just let their children watch, they’re probably going to get really mad that their kids are watching a very R-rated production. I’m not against dark: I think Swamp Thing should very well be adult, and I hope John Constantine comes in to throw in a dozen F-bombs. But Titans is a thing where the violence and language are simply gratuitous and unnecessary. Perhaps DC Universe is aiming for the generation of gamers who are used to playing violent video games and such; they’ll all applaud Titans for how “cool” it is. But all of this, with a sprinkling of child torture in the first episode: What are they going for? It’s almost like it’s adult for the sake of being adult, or “because they can;” there’s nothing that Titans does with this violence and adult material that really is needed, though.

I’m happy to report that there is a reason Starfire/Kory (Anna Diop) that horrible outfit but question why they keep her wearing that clothing since it does make her look kind of ridiculous. I will say that the racist fans who had an issue with Diop’s casting will be very confused by how statuesque, beautiful, and bad-ass Kory can be. But again, there is a part where Titans misses the mark: One thing I love about the cartoons in particular is when everyone else is brooding, Starfire is the ball of happiness and love. Here, she doesn’t even know herself. Raven/Rachel Roth (Teagan Croft) is the means to drive most of the story in the first episode, and again, there’s brooding but without the acerbic wit we get from the animations. It’s also unfortunate because Teagan is the youngest in the cast and the weight of some of the material might be a bit too heavy for a very young actor.

Finally, there’s Beast Boy (Ryan Potter). I say “finally” because it takes most of the first episode to finally get to him, and when he does appear, it’s just barely, which is also to Titans’ detriment. It almost feels like the character was an afterthought to the pilot, and that is bothersome because even in those few seconds Ryan Potter’s Beast Boy exhibits the joy that the series was missing so far.

The Titans premiere left me in a place where I couldn’t really bring myself to watch screeners for episodes 2 and 3 yet, though I did peek ahead to see how Hawk and Dove were handled. I’ve waited so long for Titans to come there’s something wrong with that, as I generally should be excited for something more. Here… I just left sad. There’s a very good show inside of this, and I’m very hopeful that “very good show” will develop with time, but it’s not there yet. Instead of shock and violence, I wish Titans had looked to the comics inspiration and focused on the rich and wonderful characters within. Thankfully, it looks from trailers that the series lightens up a bit once the whole group is together, and maybe it’s Dick Grayson’s character journey to not be so ruthless once he’s got a group of friends to back him up. But for now… meh. I’ve long said the “wait until episode XX, that’s when it gets good” fan excuse is annoying; with so many comic book inspired productions over the years, there’s really no excuse to not be great right out the gate. I am, however, hopeful we’ll get that “right” Titans, especially with a second season on the way, but so far, it’s not the best launch for DC Universe, and it’s definitely not entertainment for the whole family.