The 100 Executive Producer Jason Rothenberg talks about the series finale's surprising return & other spoilery elements from the final episode.

SPOILER WARNING: The series finale of The 100, which just finished airing on the East Coast on The CW, is being discussed in this post. If you are trying to avoid spoilers READ NO FURTHER.

“May we meet again.”

That was the theme teased for the final season and final episode of The 100 which aired tonight on The CW. The heroes of the show fought “The Last War” — and many transcended.

The finale featured return appearances from many faces from the show’s past, including Paige Turco (Abby Griffin) and Iola Evans (Callie) — but the returning actor that might have created the biggest stir among fandom tonight was Alycia Debnam-Carey showing up as Lexa, or rather, a “judge” giving the appearance of Lexa, representing someone who was very important to Clarke (Eliza Taylor)’s past.

Of course, this is something that we had to ask The 100 Executive Producer Jason Rothenberg about; but as it was spoilery, that had to wait for Part 2 of our interview, which you can find… here! Inside, we talk about the return of “Lexa,” character evolutions, and some moments of happiness for the series finale. 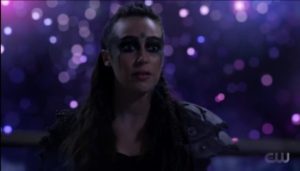 KSITETV’s CRAIG BYRNE: Was it always the plan to get Alycia Debnam-Carey back for the series finale, and can you talk about the scenes that she and Eliza Taylor shared?

Was it always the plan? Well, from the moment that we knew Clarke was going to face the judge after killing Cadogan, it became the logical choice in the room when we were breaking that story. We were talking about who might be, and I was like “you know… what about Lexa?” and everybody in the room and one was like, “YEAH!” And then it became about “well, what if she won’t do it?” And so, it became about me as a producer trying to persuade first her people, and then her to come back, and it turns out it wasn’t hard.

I had several conversations with Alycia. She loved Lexa. She loved the show. She wanted to come back. She just wanted to make sure that we were not doing it an exploitive way. I agreed that we weren’t gonna hype it all, or promote it at all, so it comes as a surprise. I’m so glad that – at least as we speak today, on Monday – it’s still hasn’t leaked.

Then directing the two of them, that was a great experience, too. There was a lot of pressure, but ultimately, they’re both such pros, and they’re always great to each other, and great together. It was a blast and I’m glad it happened.

There is some joy to be had or seen in the series finale. Can you talk about that?

We don’t often go for the “feel good moment” but I definitely wanted to show to end with an ironic sort of punctuation, so that there was some joy to be had, and for sure, Clarke coming along that beach and seeing her friends, that found family having chosen to stay with her, it’s a super emotional in a positive way.

I do want people to leave the show ultimately feeling good. Ultimately, the message is, we spent seven years saying tribalism is bad and we’re doomed to repeat the cycle of violence if we keep killing each other, and I wanted to sort of answer that with “if we can somehow figure out how to lower our weapons and realize that we’re all in this together, then anything is possible.” Including the next evolution of the species. To dramatize that, obviously, was a happier direction than most of our episodes. 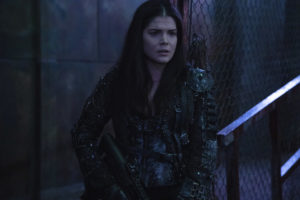 Which character do you think learned the most on this seven year journey?

Probably Octavia. I mean, she had the biggest arc, certainly; through the most changes, anyway, and comes ultimately to the realization that the only way to win is not to play the game, a la War Games. Time to put down the weapons. And she instills that in the others, so I would say Octavia. But, you know, obviously Murphy… he learned a lot, changed a lot. I feel like Clark changed a lot in a negative direction, which is, by the way, sometimes the way characters progress.

I feel like sometimes audiences only want their heroes to be heroes. In my mind, Clarke is an incredibly complex, flawed, beautiful character, but she’s also done some awful things. I feel like ultimately she learned a lesson, but as she said at the end, she would do it again, so maybe she hasn’t learned a lesson.

Was it special to be on set when you and the actors all started to realize “Hey, this is the end?”

It was like a rolling emotional tidal wave. It doesn’t happen in the first few days, but every now and then, and certainly as the production of the episode wore on, actors are filming their last scenes, and you do a clap out, you know, a series rap, and these were huge series wraps, for serious regulars have been there from the beginning, and those became more and more emotional as the episode wore on, ending with Eliza in the last scene. We saved her for last. The whole thing was really emotional.

Our thanks to Jason Rothenberg, The 100 cast, and The CW for seven years of interview opportunities. May we meet again.