The seven-year journey of The 100 comes to a conclusion this Wednesday, September 30 on The CW, and over the years, KSiteTV has had the opportunity to speak with members of the cast as well as Executive Producer Jason Rothenberg as they went on this years-long adventure. The series evolved every year, with no guarantees that your favorite characters or locations would make it to the next leg of the journey.

The 100 was also a series that made us care a lot about its ensemble, and the world-building will surely mean we’ll have a good binge once this is all said and done. The concept of “juvenile delinquents sent to a possibly toxic Earth while their parents are up on a space station” proved to be short-lived, with many science fiction aspects including anomaly portals, artificial intelligence, and warring clans and civilizations being but a part of the tapestry. If you’ve never seen it, it’s really worth checking out.

In any event… this is our last interview with Jason Rothenberg for The 100, though as we discuss in the interview, the potential spinoff teased in the “Anaconda” is still in play, so we may meet again very soon.

As for the finale itself?

For a show that is filled with tragedy, of course there is some, but there are also other emotions and certain rewards for long-time fans, as the adventures of Clarke Griffin (Eliza Taylor) and her “kru” come to an end.

One final note regarding this interview: Because we know the fans would have a lot of questions about the finale, we’re saving a lot of the answers to run after the season finale airs. You know, so we can talk about the Kelly Hu cameo and all that without spoiling anyone. Kidding. Kelly Hu does not show up. Or does she? Seriously, though. If it seems that this interview could use a lot more, it is because there will be a lot more, which you can find on KSiteTV Wednesday night after the episode has aired. Follow us on Twitter if you want to be informed of when it’s up.

On the bright side, this means Part 1 of the interview is very not spoilery, so aside from discussion of a music choice, you are totally in the clear. Good? Good. Here goes!

KSITETV’s CRAIG BYRNE: Without spoiling anything, can you tease any of the familiar faces that we may see in the series finale?

JASON ROTHENBERG: No, other than just say that there will be some. I think that’s enough of a tease.

How important was it for you to get to direct the final episode?

It was temporary insanity in my part when I agreed to do it, but I decided to do it, but ultimately having done it, I’m so glad that I did. I would have regretted not having had that experience. It was amazing getting to [do it]. I feel like I backseat directed for seven years on some level, but actually doing it was different, and I know all of my friends who did direct the show over the years are sitting in their offices somewhere, or on set somewhere, kind of like, gleeful that I got to experience what I put them through, basically.

So, it was great. It was a really, really important thing for me to do. 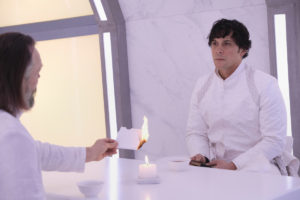 With the death of Bellamy earlier this season, can you talk about juggling what the fans say they want versus what might make for a better story?

First of all, the whole show is written, season after season, long before it airs, so there’s nothing we could do once people start reacting to episodes as they air, certainly within a season. Between seasons, obviously, we have time to kind of take stock and look at how the season was received, but the truth is, I try not to let fan reaction, either good or bad, dictate what we’re gonna do. We have a story that we’re going to tell, and we tell it, and hope that the audience comes with us. Once we’ve put it out there, it’s up to them to decide whether they’re going to take the ride or not.

Now that we’re done airing, I can say that. Telling people not to watch the show is probably not the smartest business move, but he truth is, it’s not an easy show.

One thing that really stands out in the finale, and in the series as a whole, was the fantastic selection of music. Can you talk about that?

We have an amazing music supervisor, Billy Gottlieb, and he puts the playlists together. It’s one of the most fun parts of my job, since I love music. For years and years, I didn’t have my own music supervisor.I kind of wasn’t attuned into what was happening in music, but, because of this show, I was given the gift of Billy just being so connected to what’s happening now [in music].

[Sometimes], I often would go my own way anyway. Choosing the last song [in the finale] was 100% me. It’s my favorite non-Springsteen song of all time, and I wanted to put that in the show. We played it to picture, and it happened to work beautifully. Literally, we started it and it ended exactly a very, very last frame of the show, and it was kind of meant to be.

Sometimes editors come up [with music selections]. Jeff Granzow who is probably our longest term editor, and certainly just a brilliant artist in his own right, it was his idea to do the REM cover [in a battle sequence]. We were working and working and working the film of that battle sequence, with a score, and I couldn’t quite get it there. There was something missing, and then, you know, he went off and worked one day, and I came back and he played it for me with music, and it was beautiful. It really elevated the scene.

If for some reason The 100: Second Dawn spinoff does not happen, will we ever see Callie again?

We’ll definitely see Iola Evans again, because that girl’s a star. Whether or not it’s in our show, she will be seen on your TV and movie screens for sure.

Is the spinoff still in play?

The 100 series finale “The Last War” airs this Wednesday, September 30 on The CW. You can see a gallery of photos from the finale here and don’t forget to come back to KSiteTV for a post-mortem talking about all of the things you’ll surely want to know after the show airs! Our thanks to The CW and Jason Rothenberg for making this happen.