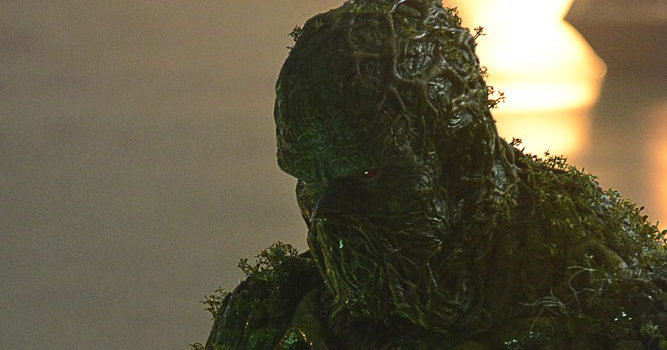 For those keeping score at home, I wasn’t the biggest fan of the start of DC Universe’s premiere live-action series, Titans. Their second live-action offering, Doom Patrol, was the complete opposite, bringing us the best DC TV pilot since The Flash. Now, Doom Patrol has some competition as Swamp Thing has turned out to be a fantastic creative success for the DC Universe subscription service which can be purchased here.

The latest iteration of the character that was often played by Dick Durock in movies and TV series of the past, this version of Swamp Thing is an ideal mix of the early Len Wein/Berni Wrightson comics mixed with the horror and… yes, “sophisticated suspense” of the Alan Moore-written comics. There are even some characters from the Martin Pasko run of Saga of the Swamp Thing comics who come in. The creature this time around is the best he’s ever looked, but the series also has the benefit of showing this tale from the perspective of Abby Arcane as played by Crystal Reed. A female protagonist is always a welcome thing, but having liked Reed on Teen Wolf and Gotham, it’s great to see her playing such a thoughtful character with some secrets of her own.

Beyond the look of the “swamp thing” (Derek Mears) and the likable albeit not white-haired protagonist (a thing I’m ultimately okay with), Swamp Thing also benefits from its setting: The town of Marais. While the show was filmed in North Carolina, it really does look like a real place in Louisiana with real swamps and some really weird people. Avery Sunderland (Falling Skies’ Will Patton) and his corporation are up to no good, and of course he has a connection to Abby from her younger days. That connection creates serious and uncomfortable drama with Abby and Sunderland’s wife, Maria (Virginia Madsen). Characters from the comics including Matt Cable, Liz Tremayne, and Madame Xanadu are all present, with others including Dr. Jason Woodrue and Daniel “Blue Devil” Cassidy coming in with the second episode. Andy Bean plays Alec Holland pre-transformation and we are totally judging his character for wearing sandals. (It’s interesting to note that Derek Mears, as the creature, seems to act it as if Alec is still in there somewhere. Hopefully without the sandals.) These characters and the Marais setting really make this piece unique, though, with special recognition needing to go to the talented production artists, set designers, locations people, and cinematographers that made this show pop.

While the behind the scenes “creative decision” to cut the first season to 10 episodes from 13 is tragic, it’s also not surprising: It feels like every dollar is shown on screen, and there were a lot of them. Nothing about this Swamp Thing looks cheap. Effects house CoSA VFX has given Swamp Thing some visuals that will scare and creep you out, and it’s no surprise that cinematic talents like Len Wiseman (Underworld) and James Wan (Saw) are involved. There were moments where I jumped out of my seat. The writers and executive producers of this piece, Gary Dauberman and Mark Verheiden, also have quite the pedigree: Dauberman for the Conjuring Universe horror films, and Verheiden for TV that I loved including Smallville, Daredevil, Timecop, Heroes, and a 2004 Dark Shadows reboot pilot that had an excellent script but very few people actually got the chance to see.

In the end, the only thing to dislike about Swamp Thing is actually a compliment. Warner Bros. and DC Universe, when hosting a screening a few weeks ago, ended up showing us the first two episodes, and it left me wanting more. While Doom Patrol has worked so well as a once a week deal, I almost wish Swamp Thing could be enjoyed in a 10-episode binge setting, because I really want to know what happens next.

Swamp Thing premieres Friday, May 31 exclusively on DC Universe. See a trailer below.