Swamp Thing will be seen by a wider audience tonight as the DC Universe Original Series comes to The CW with a 90-minute premiere. The series, based on the classic DC Comics, was brought to life by such talents as Mark Verheiden, James Wan, Gary Dauberman and Len Wiseman, and starred Crystal Reed (Teen Wolf) as CDC scientist Abby Arcane opposite movie legend Derek Mears as the Swamp Thing.

KSiteTV spoke with Crystal Reed on the phone for some insight into playing Abby Arcane, and we also touch upon her Teen Wolf castmates’ penchant for appearing in superhero projects since the series ended.

KSITETV’s CRAIG BYRNE: For those who have not seen the show, can you talk about Abby in her history with the Sunderland family?

CRYSTAL REED: That’s hard, because a lot of secrets are revealed in the first episode, but Abby comes back to Marais, and she has a history there, and it indicates what she does for the rest of the season.

What is her first impression of Alec Holland?

I think Abby views Alec as strange man who is intriguing, handsome, and also annoying. I think my favorite scene of them is in the pilot when he shows up to the Coyle house and they have kind of a strange marital spat, where they’re trying to figure each other out, and he makes that joke about Colombo. They have a flirty argument, and she’s intrigued and annoyed, and she’s like, “okay, I’m gonna just go along with this strange guy.” That sets the tone for their relationship. I’m not sure she knows what to make of him.

Can you talk about working opposite Derek Mears as the Swamp Thing creature?

Derek is physically imposing. A very large human. But what you find out very quickly when you are engaging with him, is that he is the kindest, gentlest soul. So he is the perfect person to be doing all this character work and to play Swamp Thing, because that is what Swamp Thing is. He is this imposing giant monster… not that Derek Mears is a monster… but underneath it all is this vulnerable, beautiful kindness, and I think those things are what made him so lovable.

And Swamp Thing as a character, back to Alan Moore’s run, that’s what makes him so gorgeous as well, that he seemingly is this monster, and descpicable to look at. He’s slimy and gross, but underneath all of that, “who are you, really?” And that is the question, I think, of our season.

What was your reaction when you first saw the swamp set?

I cried. I literally cried, because I felt like a little girl at Disneyland. They built this legitimate full on swamp in a big tank of water on the stage, and it looks beautiful. We had a swamp keeper who is like a pool guy, essentially, who would keep the swamp in perfect condition for us to be in and out of, and clean, and beautiful, and maintaining the pH level in all if this. There were constantly people in and out of the swamp. It was really quite a vision to stand before and look at, and to know that I got to be a part of that, and be in it, and work in it, and all of the effort that went into creating that… really, it overpowered me, and yeah, I cried. I’m very easily moved by things like that. 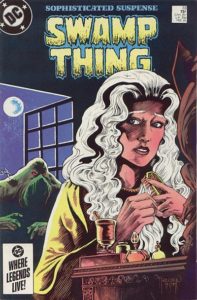 When you were auditioning for the role, was there any thought that you might have to have white hair?

Yes. They talked about it a lot, very early on. I think it went back and forth, and ultimately, Warner Brothers decided that it wasn’t right for me. But even when I got to Wilmington, we tried on white wigs.We didn’t end up going with it, but I was very intrigued. I mean, everyone wants a Khaleesi moment.

So many of your co-stars from Teen Wolf have also appeared on comic book related projects. Was there something about that show that prepared you all for this?

I believe so. I often times look back at Teen Wolf, and it feels almost like a boot camp. The nights that we worked, and the type of filming that we did were incredibly difficult, and called upon us to really give everything in every single moment. Not only because the circumstances that our characters were in were so heightened, but or so heightened, but also because we were doing physical stunts often, and most of the time, they were at 4AM. So, we had to overcome a lot of things with their bodies, and I think I learned the tone for that show. What I believe made that show so successful is that we have this set of circumstances that are supernatural, but the characters were so grounded.

In order for people to believe and watch the show, the characters have to feel real. That’s what I think is the reason why we are all still working in comic book shows. A lot of us, at least.

Did your having a role in Gotham have anything to do with your being cast on Swamp Thing?

I don’t know the rhyme or reason. I would like to think that DC likes me, and certainly it’s a Warner Brothers show as well, so maybe. I don’t know. I do have a large, very, very loyal fan base that I am incredibly grateful for, some that might have been something as well.

How much did the producers tell you about Abby’s father?

Had we have had a Season 2, that was the plan. We would have talked about Abby’s mother and father. I mean, I know who he supposed to be, but the idea was that we might change that going forward. I think it would be really interesting for her to find out who that was. hat would have been such a cool moment for me to play as an actor. 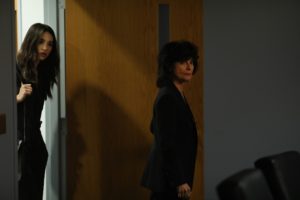 What was it like working with Adrienne Barbeau from the original Swamp Thing movie?

Oh, my gosh. I remember that day very clearly. First of all, I’m a huge fan of hers. It was humbling to be able to be with her, again, working on Swamp Thing. She gave me a lot of beautiful advice.

I was insecure, to be honest, around her because I wanted to make her proud. She was the original, and I wanted her to look at me and think “wow! This young woman is doing a great job” in some sort of way. I hope I did that.

How excited are you for a new audience to be able to see Swamp Thing on the CW?

I’m beyond excited. We told a story that felt wonderful to me, and it’s full of hope and inspiration, and to be able to give that to people again at this time in the world is something that I didn’t imagine coming, but I’m very grateful that it has.

Is Abby a character you would like to revisit if the opportunity presented itself?

I would revisit Abby Arcane in a second. She’s a wonderful human being.