The first episode of DC’s Stargirl hits DC Universe on Monday, May 18 and then makes its broadcast debut on The CW Tuesday, May 19. The series features Brec Bassinger as the “Courtney Whitmore” character created for DC Comics by Geoff Johns and Lee Moder over two decades ago, and Johns himself was the man to develop the show for television. 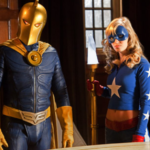 This isn’t the first time we have seen Stargirl on television, nor is it the first time we’ve seen her on TV in something penned by Geoff Johns. That would be when Britt Irvin played her in the Smallville two-hour event “Absolute Justice,” which was coincidentally written by… you guessed it… Geoff Johns. That 2-part story also introduced the Justice Society of America, a group that has a legacy that factors heavily on this show.

So now for the important question: Is Stargirl good?

The answer: Yes. While DC Universe has a lot of original content that has been pretty amazing (Swamp Thing and Doom Patrol come to mind, as does the Harley Quinn animated show), this is the closest to an “all-ages” series a new fan can get into, and without direct ties to the “Arrowverse,” that means you’re getting into this on from the ground floor. Yes, there is a little bit of salty language — not to a “F— Batman” level — and there’s even some “slut shaming” but it’s really no more adult than your random episode of Batwoman or Nancy Drew. If anything, the show can have a positive influence on young people, as this show features not only a young female who strives to do what’s right, but also there are several youths who grow and become stronger despite any adversity that they face. I like that a lot. And Brec Bassinger’s Courtney is a good center to it all, as a character who, while being good, still isn’t perfect and aware of what to do at all times. 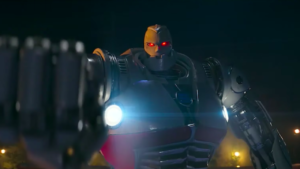 The family unit of Stargirl is at the core of the series’ first episode, and in a way, the show is about groups of families: The Whitmore-Dugan family, with Amy Smart and Luke Wilson as the parents of Courtney and her new stepbrother Mike; the “Justice Society” family of times past; the “Injustice Society” of villains; and, finally, the “family” of friends that Courtney makes along the way. Family is what you make of it, and these connections definitely make the show enjoyable. And again, going back to the family: Courtney’s relationship with her stepfather Pat Dugan is one of the best parts of the show, with Luke Wilson being the absolute perfect fit for the role. That, and S.T.R.I.P.E. looks really cool! 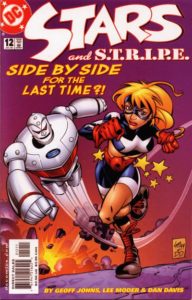 As a comic book fan, and a fan of comic book TV, I was happy to see that there are a lot of big names behind the camera, beyond Johns of course. Greg Beeman and Glen Winter are two directors who need no introduction to fans of good comic book TV. In fact, Glen Winter directed the first TV appearance of Stargirl in the first part of that Smallville “Absolute Justice” episode. And then on the writing side — I admit, when I first heard about Stargirl as a TV series I was disappointed that she didn’t get the Cosmic Staff from my favorite Starman, Jack Knight, as she did in the comics. Well, wouldn’t you know that the writer of that Starman series I loved so much, James Robinson, is a writer and producer on this show, and the first episode he wrote titled “Wildcat” references a character from that beloved series. It makes me wonder if Ted Knight and Jack Knight still both happened in the 40s and 90s, respectively, and it makes me also wonder if the Starman legacy will be explored in hopeful future seasons, just as the legacy of the Justice Society seems to be a fixture in Season 1.

The fictional town of Blue Valley adds to the atmosphere of the show and I’d like to give props to the production scouts who found such a perfect place. The production design of the series is also great, from banners representing classic JSA members to moving trucks that evoke the classic Action Comics logo. The first episode of the series sees Courtney’s family walking down the main street of Blue Valley and it just feels and looks… different from anything else we’ve seen in the past. I think it was also wise to shoot this show in Atlanta rather than Vancouver so we didn’t see any duplicated Smallville locations (save those for Superman & Lois). 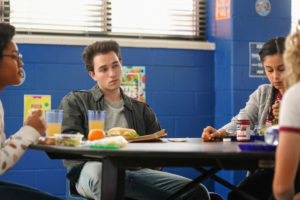 The CW made the first five episodes of Stargirl available to screen, and I find that with each succeeding episode the show gets better and better. By the time we get to Episode 4 the show seems to be spotlighting new characters in a way much like Skins UK would introduce their cast with episode spotlights over a decade ago. Sadly, this means it is a few episodes before we really get to know characters like Beth Chapel, Rick Tyler, or Yolanda Montez… but once we do, it is very worth it. And there is something we see at the end of Episode 3 that may make you scream with excitement.

Finally, no money was wasted on producing this series, so it’s no wonder they ended up licensing it to The CW. The visual effects are of a movie quality — think on the level of the Doom Patrol pilot — and it doesn’t appear they “went cheap” with any aspect.

Do I have any criticisms? After all, I have been watching comic book television for a lot of years, and something has to be really good to stand out. Well, the truth is, I had a few, but I think they were intentional. For starters, I had a lot of trouble differentiating the “grown ups” of the Injustice Society upon my first viewing, when they were in their civilian guise. I’m still not 100% sure that I could pick each one out of a lineup. I will say, though, that this show does the “evil older generation” thing better than Marvel’s Runaways did. And then finally, I feel like the show took its time in really building Courtney’s friend group. Yes, I know the show isn’t called Stargirl & The JSA, but characters like Yolanda and Beth really aren’t able to make an impact until a few episodes in, which is a shame, because they’re both so good.

The DC Universe versions of the episodes, which will drop a day sooner than The CW will, appear to be a few minutes longer in most cases, but having also watched “The CW cut” of Episode 1, I can say the first episode is still just as good if not better when slimmed down a bit. Either way, I am so glad that a wider audience will be able to see this, and I’m hoping that this 13-episode first season isn’t all we will see of Courtney & her all star super squad.

DC’s Stargirl premieres Monday, May 18 on DC Universe (subscribe here!) and the following day on The CW.