Actor and singer Chris Lee previews the Legacies episode "Salvatore: The Musical" in a KSiteTV interview

The CW’s Legacies is staging a musical tonight (February 4) at 9PM ET/PT, and that episode is a tribute to the network’s past and the show that started it all, The Vampire Diaries.

The Vampire Diaries followed the Salvatore brothers Damon and Stefan and the love triangle and supernatural situations they’d face in the town on Mystic Falls. Legacies takes that world a bit into the future with several characters descended from characters that we first saw in TVD, and one of those characters – Matt Davis’ Alaric Saltzman – is even the head of the “Salvatore School” for young people who may have monsters within. 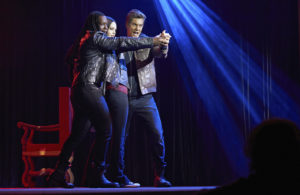 The legacies from The Vampire Diaries and its first spinoff The Originals reverberate weekly in the series, especially as the main character Hope is the daughter of the great “Original Vampire” himself, Klaus Mikaelson, and twins Lizzie and Josie have strong connections to both Alaric Saltzman and Caroline Forbes.

In preparation for tonight’s “Salvatore: The Musical!” episode, KSiteTV’s Craig Byrne spoke with Chris Lee who plays Kaleb on the series. Chris brings a great energy onto Legacies as Kaleb, but in addition to this, his vocals are a force of nature as fans of Legacies already know. For this musical, Kaleb steps into the iconic role of Damon Salvatore, so the obvious first question to ask is what his familiarity was with The Vampire Diaries prior to landing his Legacies role. 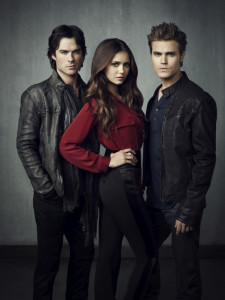 “It was kind of forced on me,” Chris admitted, sharing that he was dating a girl who was a huge fan of the show. Spending time with her, he would see The Vampire Diaries quite a bit, but on one week he became completely invested, needing to go back to the beginning to find out how things got to where they were. “I became such a fan,” he said, “and then when The Originals hit, I was blown away. That’s one of my favorite shows I’ve ever seen on TV. When I got the role [of Kaleb], and I heard it was a spin off f of those two shows, I was like ‘oh yeah!'”

This may be a surprise, though: Damon wasn’t his absolute favorite character in The TVD universe, though he was a close second. His favorite? “Klaus Mikaelson, to me, is just the greatest villain ever seen on network TV. He’s just amazing,” he said, praising the character that Joseph Morgan had played on both of the parent series.

“Salvatore: The Musical!” was first talked about back in Season 1, and Chris is aware that any excuse the producers get to get either him or Kaylee Bryant (Josie) to sing, they will usually take it. “They are keen to our multiple abilities,” Chris said, “[and] we felt like it was coming, knowing that Julie Plec is such a fan of musical theater.”

Chris Lee has had very impressive experience on stage, including the very popular Hamilton. Was it different to do something as part of a TV show rather than performing on stage with an audience?

“Technically, it’s just not the same. We don’t have an audience, and I think in theater, and the audience is like the last member of the cast, because they control the vibe of the show in so many ways, based on their involvement and their reaction in that auditorium. I felt like I missed that, but just getting in the costumes, getting on stage, the lights are hitting, the blocking… it was so fun. It made me want to do a play,” he continued. “The hair, costume, and makeup departments all outdid themselves. I think that they were excited because a lot of them had worked on The Vampire Diaries and The Originals, so they knew exactly what it needed to look like.”

And how would Kaleb have reacted if Damon and Elena Salvatore came to see the play?

“I personally, think that Kaleb might choke,” Chris speculated. “I think he might get a little too excited, because he’s such a confident dude in what he knows, and then when he’s proven wrong, he has nothing to say. I think that he’d be in a compromised position, and I think he’d be too in awe to meet Damon at that moment.”

In Chris Lee’s own life he had a similar experience. He was doing a number called “What Did I Miss?” for Hamiton, and the first time he was going to do it with the staging, Daveed Diggs came into the rehearsal room to watch. “I was like, ‘okay, you’re either going to freeze, or you’re going to do it,’ and I ended up doing it and doing a great job,” Chris recalled. “He and I are friends now, and I laugh about it, but I think that with Kaleb being 17, 18, he would have reacted a little differently,” he continued, even though Damon and Kaleb might have a lot in common.

” I think that their instincts as a species that is superior is the thing that makes them similar. We see from the very beginning when we meet Kaleb, that he’s a guy who does not get down with this whole moral compass that the school has, that Alaric kind of tries to embed in these kids,” he explained.

If you like Chris Lee’s vocals in “Salvatore: The Musical!” you can purchase his music on several platforms, including Spotify, Apple Music, Amazon, and more. He released a single titled “Miss” last week and it’s doing very well, and he has written and produced a song for Maile Brady, daughter of Wayne Brady, titled “Exhale” and it will be available Friday. “I’ve been trying to spread my wings a little bit as a creative as well,” he said.

Going back to Legacies, Chris Lee has a lot of praise for Season 3 of the CW series. “We have a lot of new relationships and intimacy with different characters. It’s just taken to a new level. I think it’s even better than it was before, and it’s always been great,” he enthused. As for the musical, he definitely recommends it, even to new viewers. “It’s in the midst of supernatural chaos,” he teased, but pitched that as “another hook” for new fans. “If you’re a fan of musicals, then you’re probably a fan of storytelling and romance and drama, and we’ve got so much of that.”

And that’s not all. “You will always get nuggets of musicality coming from our cast members,” he promised. “I just shot an episode last week where I was singing again, ao you’ll definitely get more of that. So I think it’s a great jumping off point.”

You can get a peek at Chris Lee’s performance of “Hello, Brother” below. Don’t miss the show at 9PM ET/PT tonight on The CW – photos from “Salvatore: The Musical!” can be found here.