Legacies #1.1 Review: “This Is The Part Where You Run”

KSiteTV's Vampire Diaries reviewer Stephanie Hall reviews the first episode of The CW's Legacies, "This Is The Part Where You Run"

Stephanie Hall reviewed The Vampire Diaries back in the day for KSiteTV and now she offers her thoughts on the first episode of The CW’s sequel series Legacies.

A tribrid, a headmaster, and a newly awoken werewolf walk into an exorcism… and it’s just your average Thursday night in Mystic Falls. Legacies dives back into the wild world of the supernatural created by The Vampire Diaries and The Originals, but wastes no time establishing itself as a series that can stand on its own merits. The kids are all grown up and fighting their own battles in a way that feels familiar, yet fresh. Full disclosure: I haven’t finished the final season of TVD or seen much of The Originals, so there was a moment when I considered letting this show slide past me, but I’m thankful I tuned in because this is the show that I’ve been looking for: something fun and crazy, but also genuinely endearing.

With Julie Plec having lived in this world for 9+ years, the mythology and the characters came across more succinctly, clearly, and effortlessly than most other pilots I’ve seen. For audience members new to this franchise, Landon’s gradual introduction to this supernatural world parallels their own introduction without giving familiar viewers an exposition spiel that they don’t need. Impressive, since there’s a LOT of history and mythology to unpack upfront. One of my favorite aspects of the Vampire Diaries was just how much mythology made its way into the show and how many supernatural creatures were brought to life. Having a human, a vampire, a werewolf, witches, and a combination of all three rounding out the main cast is a solid way to ensure a diversity of stories and problems and keep things from getting stale.

The most delightful surprise of Legacies is the amount of heart and depth that these teenage characters possess. It’s not a show about otherworldly problems. It’s a show about finding where you belong, finding home, a family, and a sense of normalcy in an extraordinary world. In just one episode, we saw fierce and vulnerable sides to Hope, Josie, and Lizzie, as they all deal with human struggles. While I wish we saw more of Raphael and MG, I am never going to complain that the female characters were spotlit for an episode. There’s still a whole season ahead of us to learn about the boys.

In one of the coolest teasers I’ve seen, Hope struts into the church with power and a confidence beyond her years, and later slowly opens up her heart guarded by the walls of loss. She never came across as an angsty teen or someone mad at the world for the way her life turned out, but rather a character relatable for all ages. She’s someone who has trouble letting others in so she doesn’t have to suffer the pain of losing them. It’s not a unique struggle, but it’s uniquely portrayed in such a heartbreaking way and provides the opportunity for a tremendous amount of character growth throughout the seasons.

Same with Lizzie’s struggle. Her meditation scene with Alaric still echoes in my mind even days after watching this episode. Matt Davis and Jenny Boyd nailed the emotion as she switches from an angry witch to a wounded daughter and struggles to understand and accept herself as she is. We didn’t see much of Alaric with his daughters this episode, so I’m looking forward to seeing more of that relationship and hopefully watching Josie and Lizzie accept Hope as another sister because she could use some family. Lessons of self-acceptance and overcoming fear are exactly the types of themes I want to see, especially in a series with a young cast and audience. 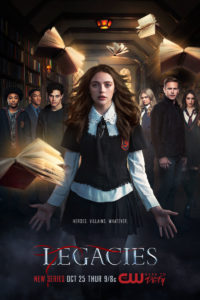 With any show geared towards teens and young adults, there’s inevitably going to be underage intoxication. While these situations are not unrealistic (although I’ve never been invited to a party in the woods, nor would I attend one because nothing good happens in the woods, ever), I wish shows of this sort would be less willing to depict 15 year olds drinking and smoking. It doesn’t need to be a PSA. It doesn’t even need to condemn this behavior. I would just like to see shows take a more responsible approach as an influencer and write around the “need” to use these scenes to add ambiance, deviance, or fun.

Along with this, romance drama is a staple in YA stories. Again, a realistic teen angle, and this time, I’m more open to it. The good news is that this series is already so much than a girl looking for love. Even with a majority of Hope’s scenes involving Landon, her story was about finding someone, anyone, to open up to. Plus, I’m fine with the teenage romance so long as it’s not pitting women against one another. There’s the potential to go there with Josie and Lizzie, but I’m remaining optimistic given how protective Josie is of her sister.

Legacies seems to be putting in more of an effort to be inclusive and represent the world, real and fictional, as a whole. Not only do they have the trifecta of supernatural creatures (probably more since Alaric said the supernatural “covers a lot of ground”), but they’ve also made improvements in racial diversity and LGBT inclusion since the Vampire Diaries premiered nine years ago. The Vampire Diaries struggled with LGBT representation. And by struggled, I mean it took them six seasons to introduce series regulars of the not straight variety, and then they went up in literal flames. So I was pleasantly surprise and a little shocked to see Josie’s first scene and am actually interested to see where her heart takes her.

It’s interesting to hear that Legacies will be taking a monster-of-the-week format because that’s not the impression I got after watching the pilot; however, I think it’s a fitting move. Procedural structures generally work well for supernatural shows because they can explore a different aspect, a different type of character each week, and there’s such a deep well to pull from in this franchise. I’m excited to learn more about the Salvatore school and see what antagonists await the students on the road ahead, and I’m so thrilled to have found another somewhat soapy, surely shocking series to fill my Thursday nights.

Come talk about Legacies on the KSiteTV Forum!