The Art of Being Cat: Calista Flockhart On Playing Supergirl’s Boss

Interview with Calista Flockhart of the CBS television series Supergirl

One of the highlights of the CBS series Supergirl (airing Monday nights at 8PM ET/PT with new episodes still airing on the next two Mondays) is the performance of Calista Flockhart (Brothers & Sisters, Ally McBeal) as Kara’s boss, Cat Grant, head of the CatCo corporation and source of many of the show’s best lines. 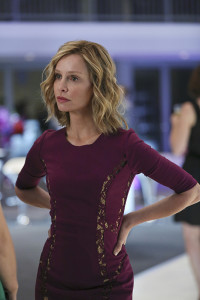 Yesterday, we were part of a group of journalists visiting the Burbank, California sets of the hit CBS series, and we talked to the actress about what it’s like to be Cat.

Every episode seems to peel back a layer of what makes up Cat. Can you talk about that?

It does, actually. I’m not in charge of the writing, but they do such a brilliant job of – just like you said, they peel it back every week. We see her sensitive side; we see the reason she behaves the way she does… so we just are slowly getting clued in to a more three-dimensional kind of character.

What I really love about it is that she can snap right back into the old Cat as well. It’s flexible, in that she can kind of do whatever she wants.

She also unwittingly helps Kara out with whatever is going on with her life and her journey.

I think that Cat sees something special in Kara and is really smart. She gives her advice without giving her advice, and tells her what to do by being kind of nasty and suggesting it in her way, and nobody really gets that, but I think that’s because Cat is so good at it, and she’s so smart. She can manipulate that advice, but in a way that it doesn’t sound like advice. That’s how I think of it. 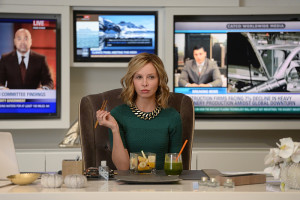 Is Cat based on anybody in your real life, or a figure you may have seen on television?

No, she isn’t. I get everything I do from the script. It is all right there. I barely have to do anything, and the writing is just so good that it comes right off the page. But sometimes I’ll try different variations — I think of her as a very busy person, and she just has to get the job done, and sometimes I’ll say “well, what if I just was REALLY nasty, and see how that works?” And then “ah, that didn’t work”… I’ve just kind of been playing around. I still don’t really know who she is yet, and it’s kind of trying to find the balance and the tone of when she’s just busy, and when she’s kind of nasty, and when she’s impatient, and when she’s angry… you don’t want anything to be shrill all the time, and annoying… that can get really old… so, it’s just trying to find the colors in her, but at the core of it, she’s just a busy, strong, unapologetic boss who has to get the job done, and she does not tolerate fools at all. She gets impatient. In a script coming up, I say something like “I’m impatient with dumb people.” It’s things like that.

Will we see more with Cat and Maxwell Lord (Peter Facinelli)?

I don’t know! You know, we were just talking recently.. we saw each other in the parking lot… and I said “What? They don’t like us together, or something?” Because we’ve had no scenes together since that one episode when we were dancing. So I don’t know where that’s going to go. 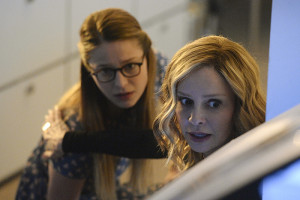 In “Livewire,” we saw Cat getting into the fight a little bit. Do you like doing those action scenes?

Will we be seeing more with Cat and her mother (Joan Juliet Buck)?

I hope so. There are so many issues! I think we get a glimpse why Cat is the way she is, a little bit, too. I liked the dynamic of the mom and Cat. 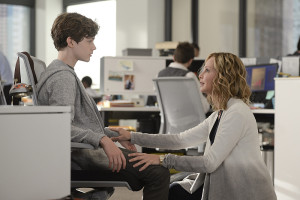 How has Cat’s relationship with her mother influenced how she is with her son, Carter?

I think she says it in that episode with my mother — Carter’s always going to know how proud I am of him. So, I think I’ve learned and have to make a conscious effort not to do what my mother did to me. I try to be the opposite of my mother.

Is it interesting being a character seen and known by younger viewers for your role as Cat?

It’s funny; I dropped off my son at school — there’s a middle school and a high school, and there were some girls who saw me in the car, and they were waving, and I was waving back, and then my son was mortified…. but it’s really nice. 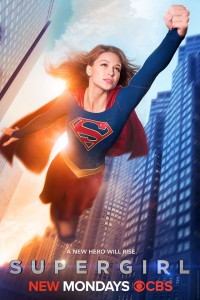 Have any of them ever been scared of you, though?

You would think they would be terrified of me! But no. I haven’t had that experience yet.

I was wondering… last night’s episode, I think I was drunk in the scene, and I remember thinking to myself “I wonder if this is a good thing,” and every time they want me to go get a drink in the office, I say “well, we don’t want her to get a drink every time she’s upset.” So it’s that balance between the older audience and the younger audience that I try to keep in mind.

How much influence do you have over your character?

I think it’s really collaborative. Everybody’s really open to any ideas that you have. Everybody wants to explore. Nobody really knows yet — it is so early in the process, so it’s very collaborative, very open, and you try something, it doesn’t work, you throw it out, and you try something out. Ali Adler is the producer on the set, and when I said “I can’t keep going to alcohol,” she put a little jar of jelly beans, so I went over and started eating jelly beans.

Everybody works together in that way. It’s great. It’s really open-minded up there.

Do you improvise any of your lines?

Sometimes. I think I started saying “Chop-Chop!” and then the next script, it was written. So, little things like that… occasionally I’ll add a little line at the very end of the scene so they have the ability to cut it out if they don’t like it. 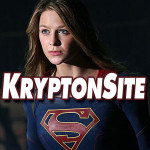 You mentioned Cat being smart. Is there any possibility she might have a clue that Kara might be Supergirl?

No. Not yet. She’s smart, but she’s not that smart!

Supergirl airs Mondays at 8PM on CBS. Follow @KryptonSite on Twitter for updates on when we will be posting more interviews! You can find photos from next week’s episode, “Human For A Day,” here.