Review of the DVD set for Head of the Class: The Complete First Season

Warner Bros.’ “Warner Archive” continues to bring some rarer classic TV to DVD with the recent release of Head of the Class: The Complete First Season manufactured on demand.

The three-disc collection contains all 22 episodes from the first season. Here’s the official logline for the set:

Laid-back substitute teacher Charlie Moore (Howard Hesseman, WKRP in Cincinnati) is expected to do little more than read magazines when he’s assigned to a New York City high school’s Individualized Honors Program. The high IQs of the gifted IHP students are only matched by the high pressures the school’s principal, Dr. Samuels (William G. Schilling), places upon the self-proclaimed geeks. The unconventional Charlie decides to defy expectations and try teaching the kids of the IHP, even though they all seemingly know more than he does. There’s one advantage Charlie has over his charges, however: the courage to take risks and grow. Soon enough, his 10 charges – Arvid (Dan Frischman), Darlene (Robin Givens), Simone (Khrystyne Haje), Alan (Tony O’Dell), Dennis (Dan Schneider), Sarah (Kimberly Russell), Janice (Tannis Vallely), Jawaharlal (Jory Husain), Eric (Brian Robbins) and Maria (Leslie Bega) – begin to exceed expectations on their own.

The first thing we’ll probably look at is the box art, and all things considered, it does what it needs to do without being flashy. It’s obvious that these are nerds, this is the Eighties, and their teacher is the outsider.

As for the set itself…

I would often watch Head of the Class in syndication back when I was in high school, over 25 years ago. Sadly, the series has not been seen a whole lot since, despite some talent that would later do a lot more in the entertainment industry, either producing television or, in the case of Robin Givens, appearing on Riverdale. For whatever reason, I was more familiar with the later episodes, with cast members including Lara Piper, Rain Piper, and Michael DeLorenzo. I even watched the final season with Billy Connolly and I still refuse to acknowledge Billy as a true spinoff of this series.

I was too young to have seen Welcome Back Kotter too much, and so, it wasn’t until later in life that I noticed the near-identical sets. Head of the Class was like Kotter in reverse: Instead of a bunch of “dumb” “Sweathogs,” this is a group of brainy, smart… well… nerds. I believe the character “Arvid” even notes that if you look up the word “nerd,” you’d see his picture. The first season does a lot to establish this group and make each character unique; it also featured a lot of diversity that you might not see in other shows, though, alas, not a single out gay character… thank trailblazers like Wilson Cruz for giving us those just a few years later. I also was too young to have seen Howard Hesseman on WKRP until later in life, so this was my introduction to him as an actor, as Charlie Moore. I liked the “everyman” nature of his character opposite this group of social misfits. And I still don’t know why Khrystyne Haje disappeared, because she was (and probably still is) beautiful. I also know most older viewers will find “Janice” the girl genius annoying — being the same age as the character was when this series was originally on, I didn’t mind her. Also, Brian Robbins’ Eric is totally intended to be the “Vinnie Barbarino” of the bunch.

The notion of doing a series about young geniuses is in many ways a precursor to the success of The Big Bang Theory, except in this case there are more than 4 or 5 misfits, but a whole classroom full of them. Those who like Big Bang would probably enjoy this series in similar ways, and it’s not surprising that an HBO Max reboot is on the way. (Also not surprising is this DVD seemed to come out around the time it was announced!)

Head of the Class later had some major milestones like filming in Russia, and some musicals… and while those aren’t so much in Season 1, it’s still enjoyable, despite Mr. Moore’s hideous rat tail. which was unattractive even 30 years ago.

Video quality on this set is… well, better than it would have been watching on TV in 1986, but a little grainy at times, as one might expect from a MOD release. Sadly, there are no extras and no commentaries. I noticed the font used in the closing credits being different in the pilot; I wonder if a different opening sequence had been prepared prior to going to series, and if yes, it’s a shame even that couldn’t be included on here. Hey, WB: I’ll research this stuff for you for free if you want! But still, this was enjoyable, and I’m hoping the other seasons of the show are coming out soon… or, better yet, if more classic shows like this one end up on the HBO Max streaming platform. There are so many series in the Warner Bros. TV archive, and I’d love to have access to more.

Order Head of the Class: The Complete First Season from Amazon and support this website! 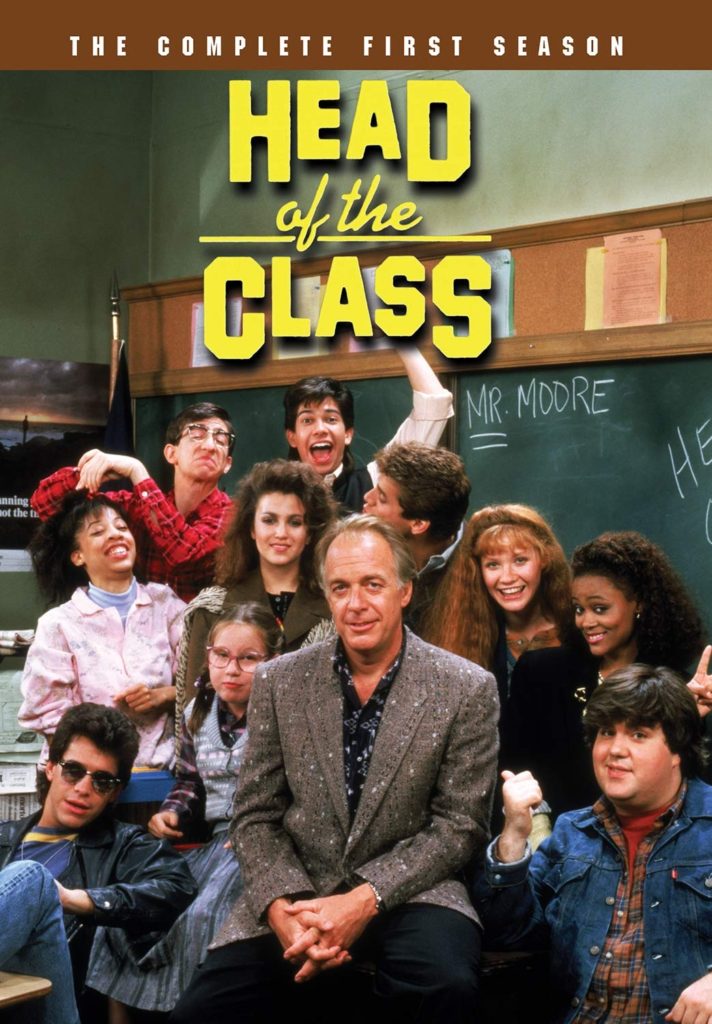