DVD Review: The Man From U.N.C.L.E.: The Complete First Season

DVD review for the Complete First Season box set of the classic TV series The Man From U.N.C.L.E.

I pride myself in my knowledge and experience watching classic TV, and even with all that I have watched, I had never seen a complete episode of The Man From U.N.C.L.E.. I’m not sure if the show just wasn’t syndicated where I grew up — the concept was surely interesting — but I never got that chance.

That makes the DVD release of The Man From U.N.C.L.E.: The Complete First Season – hitting stores August 4 – that much more exciting, as I get to discover something “new,” in a way. The series is, of course, inspiring a big-screen movie with Henry Cavill and Armie Hammer that will be out this month; making it a perfect time for Warner Bros. Home Entertainment to release — or rather, re-release it. 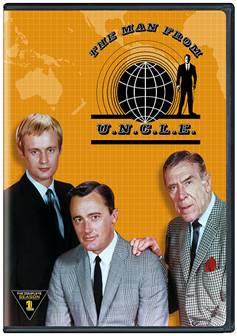 The “re-release” aspect might also explain the only problems I have with this set. But first, the good stuff.

What’s the show about? Here’s how Warner Bros. Home Entertainment describes it:

In this hit spoof of the spy genre, actors Robert Vaughn and David McCallum play the roles of top agents Napoleon Solo and Illya Kuryakin who use their charm, wit, and a never-ending assortment of gadgets to defend the world from evil, chaos and bad taste. The successful series also stars Leo G. Carroll as Alexander Waverly and features guest stars such as William Shatner, Leonard Nimoy, of Star Trek, Kurt Russell, Ricardo Montalban and longtime comedy favorite Ken Murray. From trying to save the world from fear gas to trying to save themselves from a pack of bloodthirsty cheetahs, these serious spies bring the suspense and fun to life. You may even forget it’s in black and white!

I actually had not known the first season of The Man From U.N.C.L.E. was in black and white; I had also heard the show eventually got pretty campy — I wasn’t expecting Get Smart level camp (though I do love me some Get Smart), but I was pleased to see that the stories from this set that I’ve been able to watch so far were actually quite seriously done – well acted AND well written. Maybe the “camp” association kept people from these gems. Even with that said, I really liked what I’ve seen of Season 1 and would love to see the subsequent seasons.

There are 10 discs on the Season 1 set, and 29 episodes. Yep, TV had 29 episode seasons back in the Sixties. Wouldn’t it be nice…

The box set design looks like a DVD set that would’ve come out a few years ago. The packaging is thick, not slim like a lot of TV-DVDs are these days. On the one hand, it’s probably a lot better put together than something modern; on the other, it’s a big red flag that this is actually a repurposing of an exclusive set from a few years back — more specifically, Time-Life’s Man From U.N.C.L.E. collection.

Which is fine. It was surely a lot more expensive than what is coming out on Tuesday, and this is a great way for people who haven’t seen the show to catch on. But there’s something else…

The U.N.C.L.E. complete series set and I think even an earlier Season 1 DVD release had a lot of extras – including an original pilot titled “Solo” IN COLOR. They had a Season 1 episode guide that would be great to have seen here. There was also a spotlight on the U.N.C.L.E. guest stars in Season 1.

Extras on the “new” U.N.C.L.E. Season 1 DVD? None, even though there would be some room on Disc 10 as there are only two episodes on that one.

Would it have been that hard to throw buyers a bone here, or would it have raised the price so it wouldn’t be an affordable set? Under $20 is a bargain, but extras would’ve really been nice here.

In any event, there are some great episodes on this set, and I was very pleasantly surprised with the show. The episodes look remastered and gorgeous. But, I do warn, this isn’t the place for extras.

You can order The Man From U.N.C.L.E.: The Complete First Season from Amazon.com and support KSiteTV!